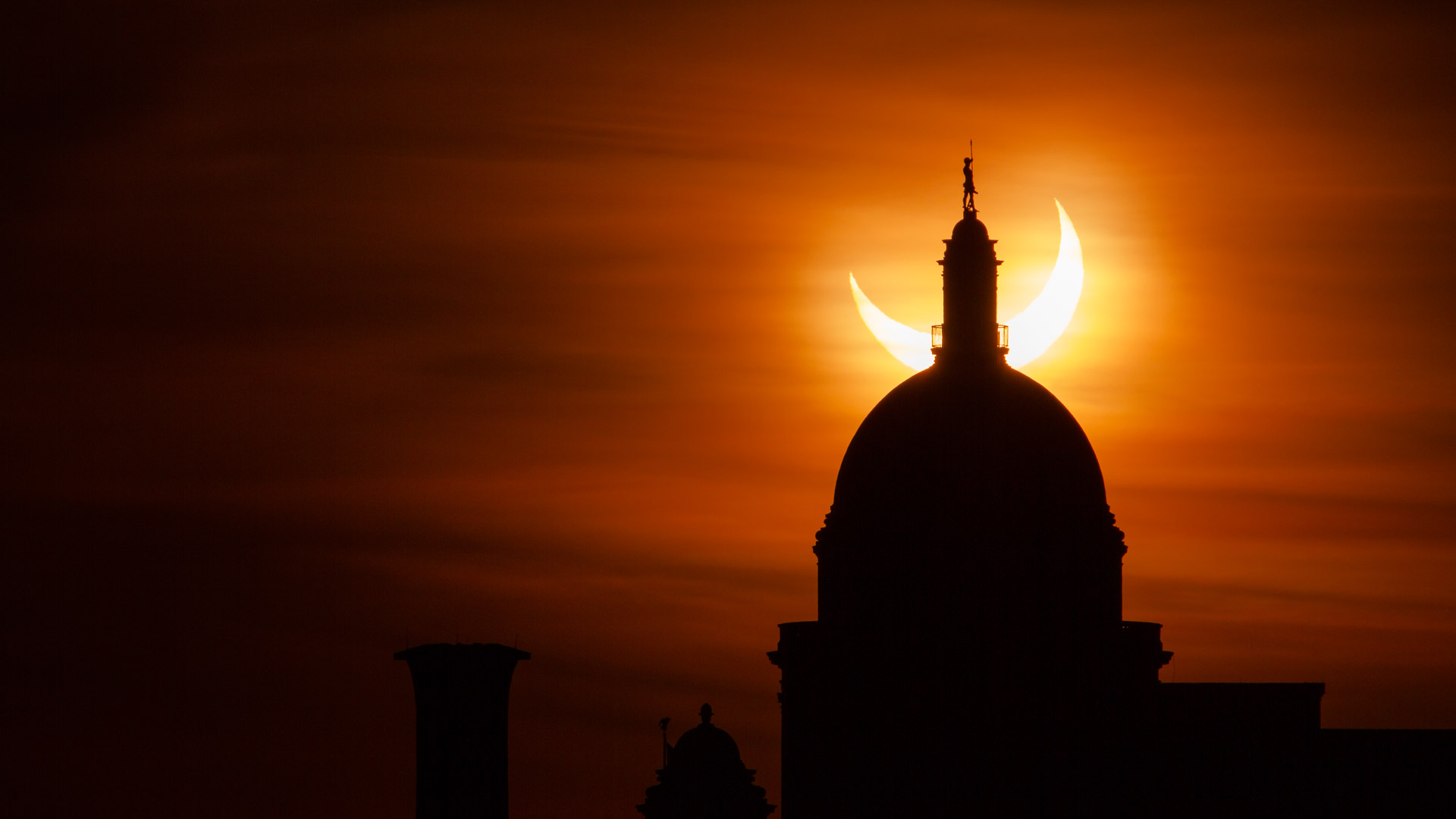 In early May I saw a news article about an annular solar eclipse that was going to be visible the next month in Canada. An annular solar eclipse is when the moon is too far from earth (and therefore too small) to cover the full disk of the sun and cause a total eclipse. Instead, you end up with the so-called “ring of fire” eclipse. As the ring of fire effect wasn’t going to be visible anywhere near Rhode Island, I wasn’t immediately excited, but with fond memories of the total eclipse of 2017 in my mind, I figured I’d dig a little more (although, let me just say here that the difference between viweing a partial eclipse - annular eclipses included - and a total eclipse is like the difference between watching your kid play Tecmo Baseball on Nintendo and attending game 7 of the MLB World Series - they are completely different experiences).

As I looked into it, I learned that while the annular “ring of fire” wouldn’t be visible from Rhode Island, the sun would be still be eclipsed more than 80% here, which is pretty significant. More than that, though - I discovered the sun would be rising while significantly eclipsed and the maximum extent of the eclipse would be reached shortly thereafter. Immediately, this went from something that I’d saunter outside to go look at and maybe photograph with my leftover eclipse glasses and filter to a major photographic event. You see, when the sun is close to the horizon, it lends itself to being photographed with foreground subjects - of which we have many in Rhode Island. This would be a once-in-a-lifetime event - the next time the sun will be eclipsed to this extent at sunrise as viewed in Rhode Island is the total eclipse that will be visible here in 2079, at which point I very likely won’t be running around taking photos.

The prospect of a crescent sun at sunrise immediately brought to mind one of the more impressive eclipse images I’ve seen by Joshua Cripps, a talented landscape photographer from the United States who kindly gave me permission to include his inspiring eclipse image in this blog. 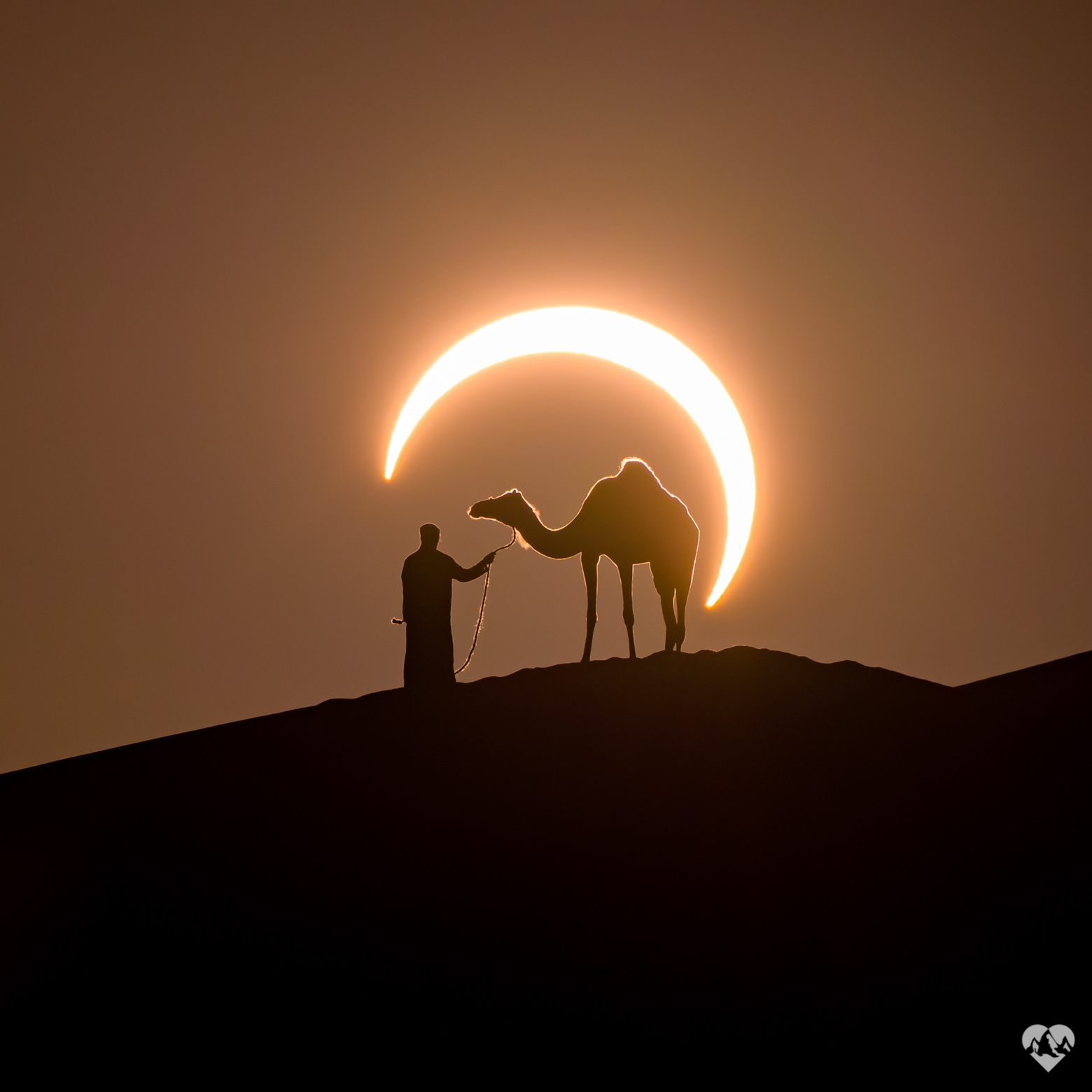 While I wasn’t expecting to borrow a camel from the Roger Williams Zoo (I doubt very much I could improve on Mr. Cripps’ execution), the possibility of shooting the eclipsed crescent sun breaking the horizon in front of something interesting in my own backyard of Southern New England had me excited. The trick was figuring out a something interesting that I could line it up with.

Being close to the summer solstice, the eclipsed sun would be rising to the north-northeast. Eclipses are telephoto lens subjects (the sun is fairly small from a photography standpoint requiring a long focal length to make it appear large in an image), so I started considering subjects that could be photograhed from a long distance from west. The first thing that came to mind was a lighthouse, and there were several to consider. My first consideration was my local lighthouse, Conimicut Light. 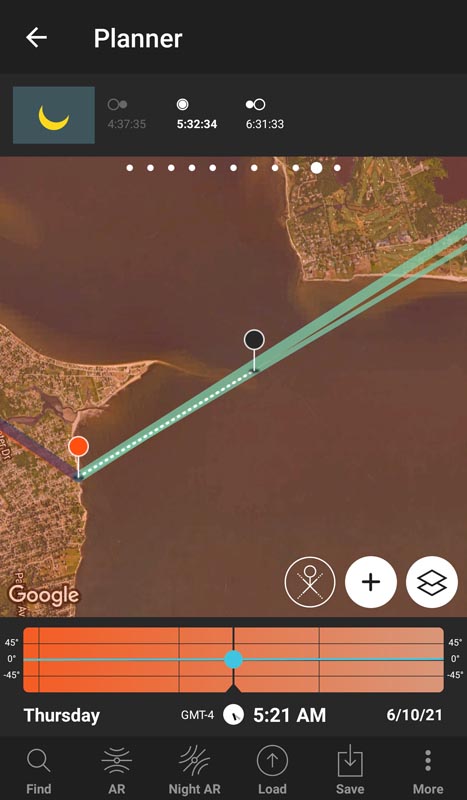 Checking Photopills (the app I use to plan these sorts of shots), it was clear that I’d be able to access the beach at the location of the alignment. This location had the extra benefit of being right around the corner from my house - sort of nice for an event happening around 5:30 AM. The biggest unknown was how well the lighhouse would break the horizon behind it, as it’s in the middle of the bay and has Barrington as a backdrop rather than the open ocean. I took a trip down to the location a week or so before the eclipse to scout it out and wasn’t too thrilled with what I found. 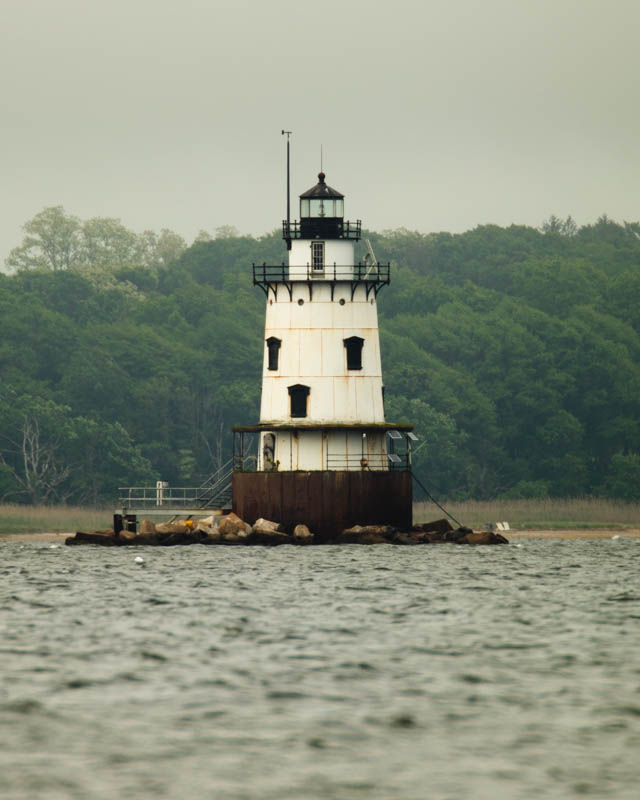 Of the lighhouse profile, only the focal broke the horizon, which means getting a crescent around the lighthouse wouldn’t be possible.

I also considered a few other lighthouse options, including Dutch Island, Beavertail, and what would have been a pretty cool alignment of Hog Island light and the Mount Hope bridge (which would have required an overnight on Prudence Island since the first ferry arrives well after sunrise in June). However, Dutch Island would have had the same horizon issue that Conimicut did, Beavertail is a little too far for the lenses I have avialable, and schedule didn’t permit me to spend the night on Prudence Island, so I started looking for alternatives.

One of the first possibilities that came to mind was the Independent Man statue atop the statehouse. However, I normally shoot it from the east. I fired up Photopills and checked if there were any locations with a clear vantage point along the sightline for the eclipse. The answer ended up being a maybe - from the grassy area on the south side of RI Route 6. But with fences and trees possibly blocking access and sightlines, I needed to make another scouting trip. 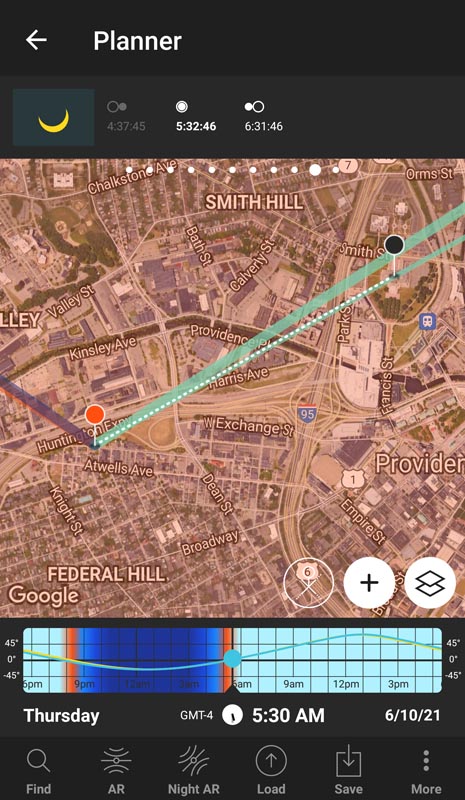 I did this a few days ahead of time, and found an unlocked gate providing access and a bit of leeway regarding sightlines, but still some uncertainty. I also was frustrated to see that there was a radio transmitter tower located between the location and the statehouse dome, although photoshop could make easy work of that if need be. 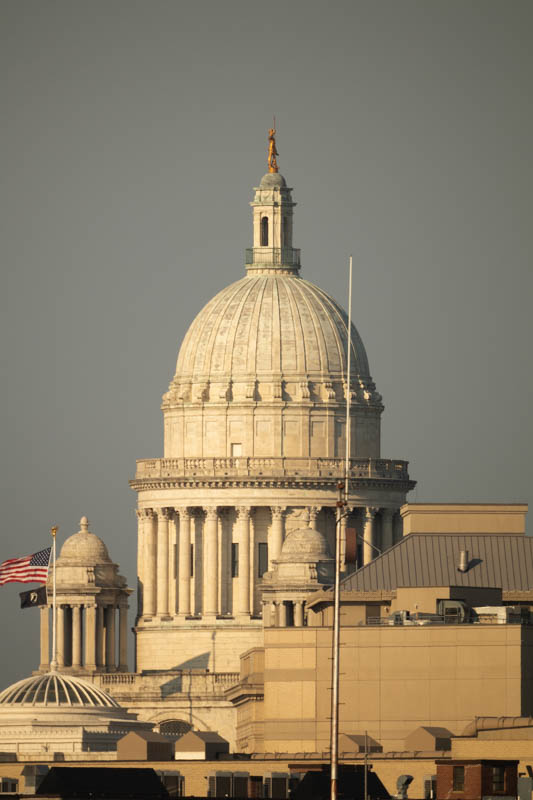 With tight signlines around trees, it was going to be important to narrow down the exact location, which meant figuring out the exact elevation to the statue from the shooting location. To do this, I fashioned a sextant from a framing square, a piece of string and some nuts tied to the end, and a card with angles marked off. 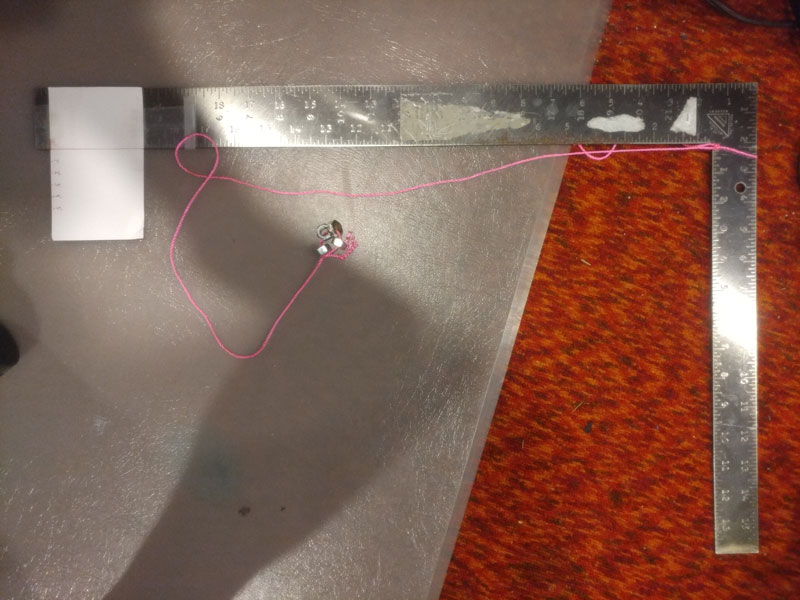 I returned to the location the day before the shot with the sextant and my friend Kingshuk Bose who planned to join me to shoot the eclipse. We worked out a fairly exact elevation to the statue (which ended up being about 1 degree higher than I thought) and from this figured out more precisely where we’d need to be. We had pretty much worked out every variable we could; the only potential wildcard was the weather. After that, it was on to home, where I pulled together camera equipment and tried to get an early start at sleep with a 3:50 AM alarm waiting for me (celestial events don’t wait for you if you’re late).

Next morning, the alarm went off early and I loaded up and got on the road. My plan was to set up a few different cameras to try a few hands-off things (that mostly didn’t work out). I arrived a bit before sunrise and got to enjoy a very nice pre-dawn sky. 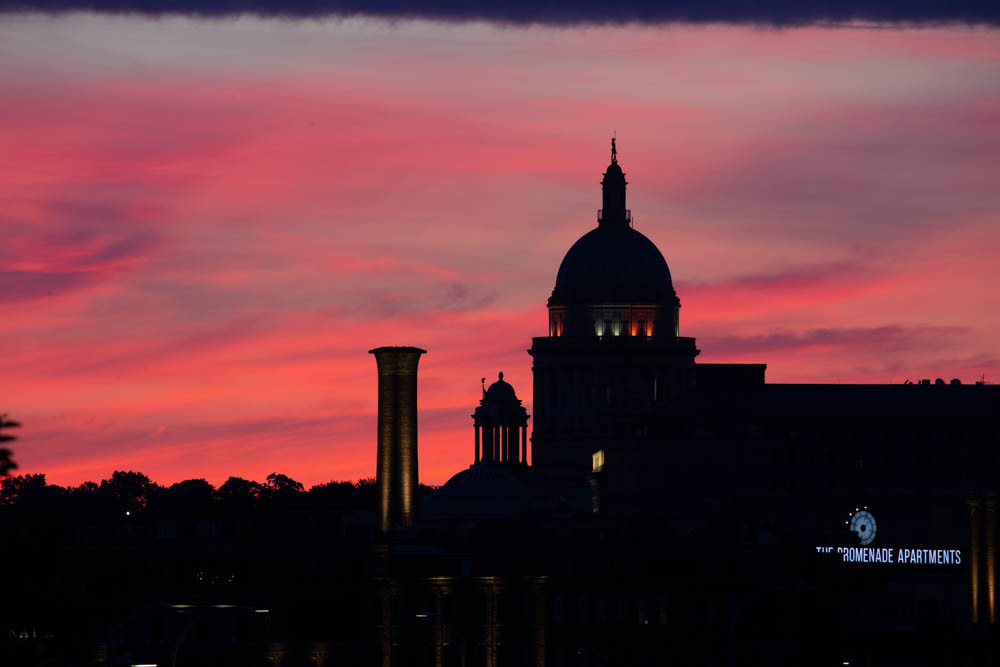 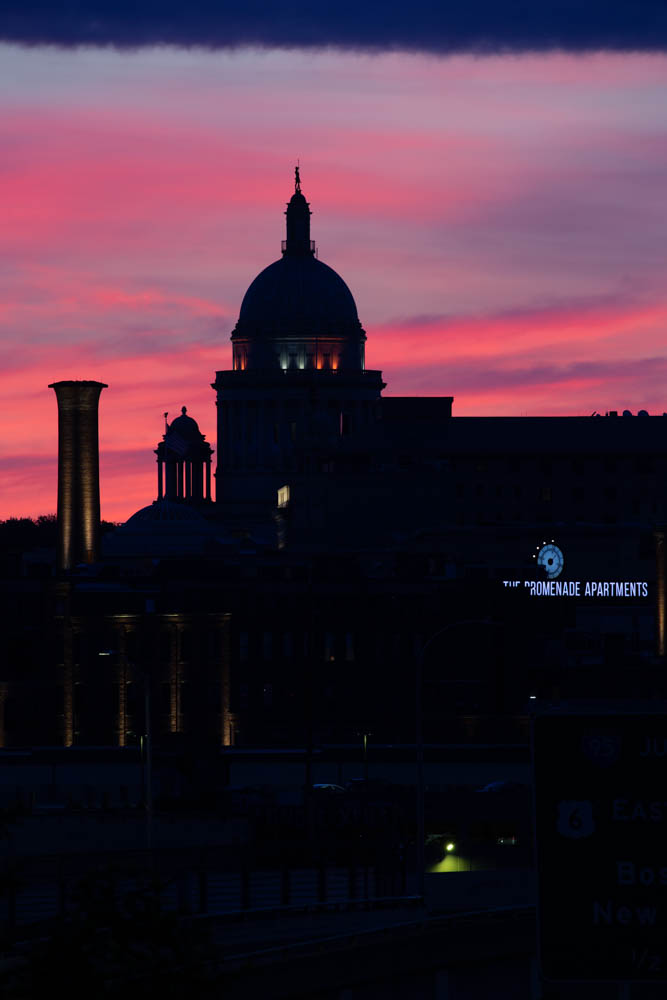 I pulled out all the cameras and started setting them up. Kingshuk arrived shortly thereafter. Within 15 or 20 minutes we had quite the setup there on the side of the highway. 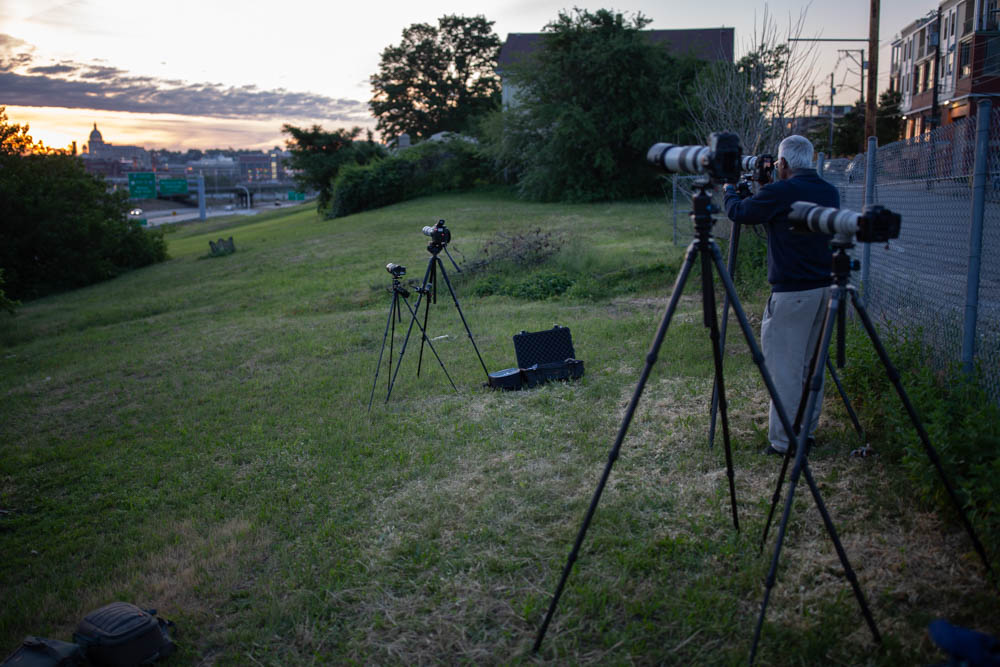 Sunrise (the point when the sun breaks the horizon) came and went, but the sun didn’t immediately appear. It had us a bit nervous, and it ended up there were some clouds very close to the horizon that ended up blocking many of the right-on-the-horizon compositions that most photographers I follow had lined up (including basically all of the other potential shots I had considered). Thankfully for Kingshuk and me, a few minutes later the sun popped out from behind the clouds as it rose towards the statue. 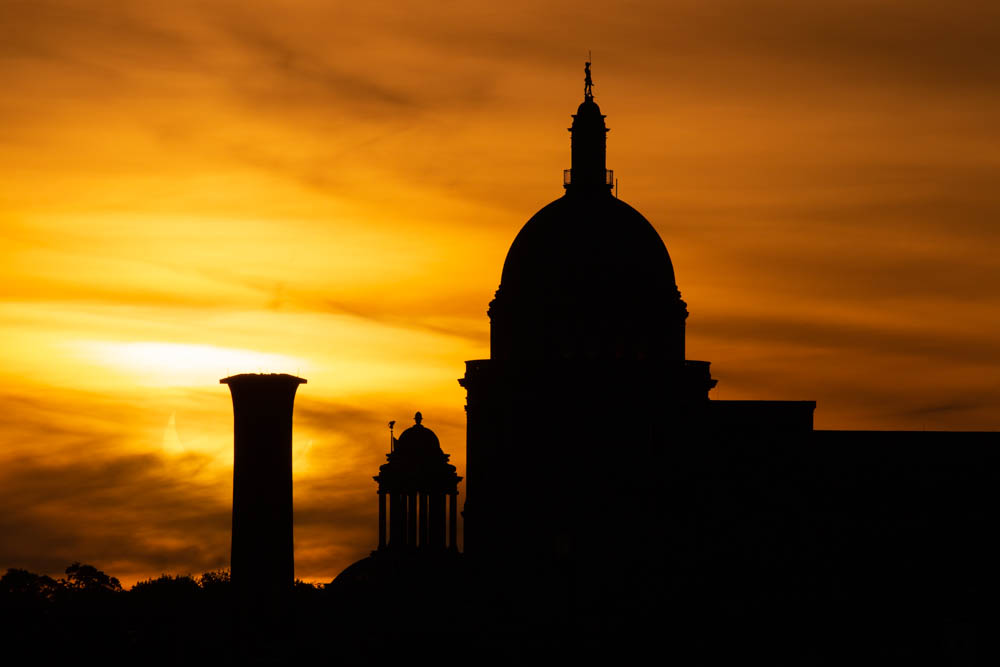 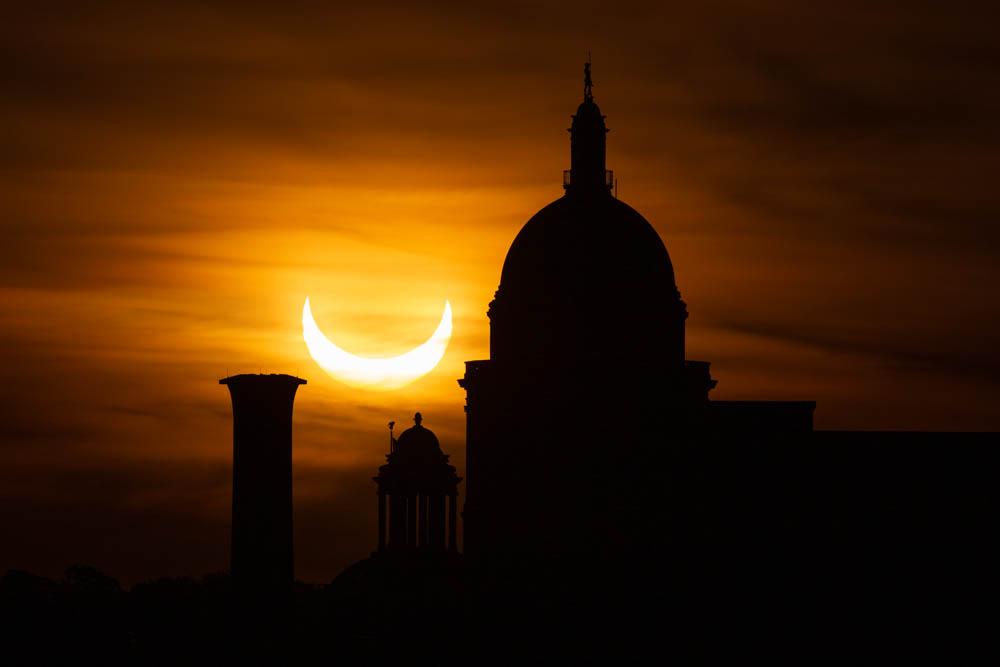 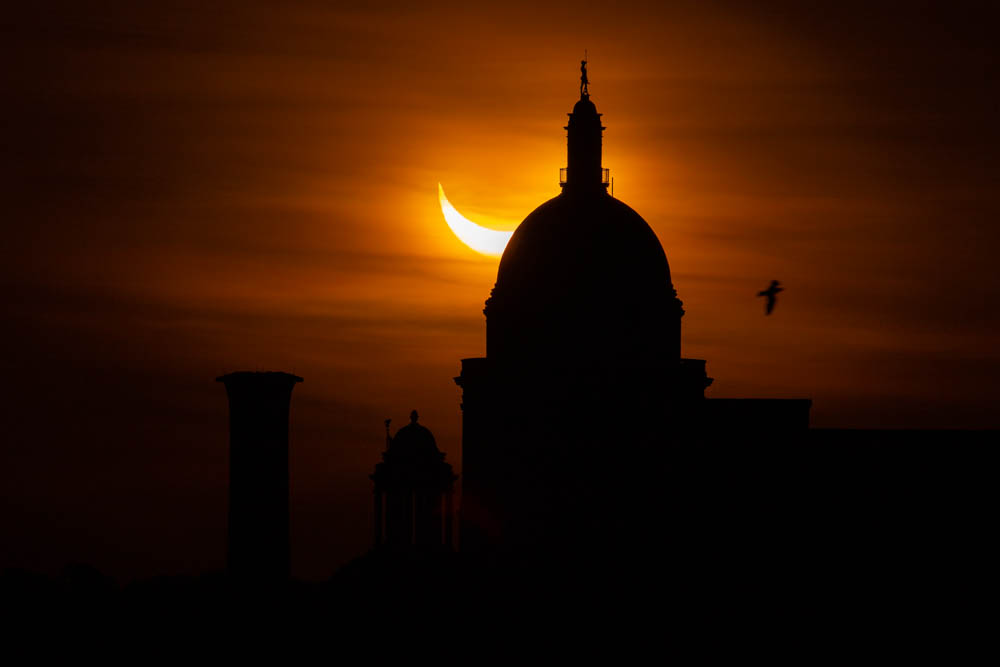 We started shooting away, dialing in an exposure which was a bit brighter than I had expected for the sun right on the horizon (so much so that I threw on my 6-stop ND, although a 3-stop would have been better). As it kept rising, it got brighter faster than I expected, meaning my video and timelapse setups ended up too bright for the most part. Note that because the sun was very low (and thus much dimmer than mid-day due to the extra atmosphere it has to shine through when close to the horizon), I wasn’t using a solar filter in this case. In general, this is not recommended as it can lead to damage to your equipment or near-instant blindness if you make the unfortunate decision to put your eye to an optical viewfinder (I used liveview exlusively during the morning). If you’re ever shooting an eclipse, make sure you’re taking appropriate precatutions to protect yourself and your camera gear.

As the alignment apporached, I fine-tuned my tripod positioning a bit to keep the crecent nicely aligned with the statue for a few different images. 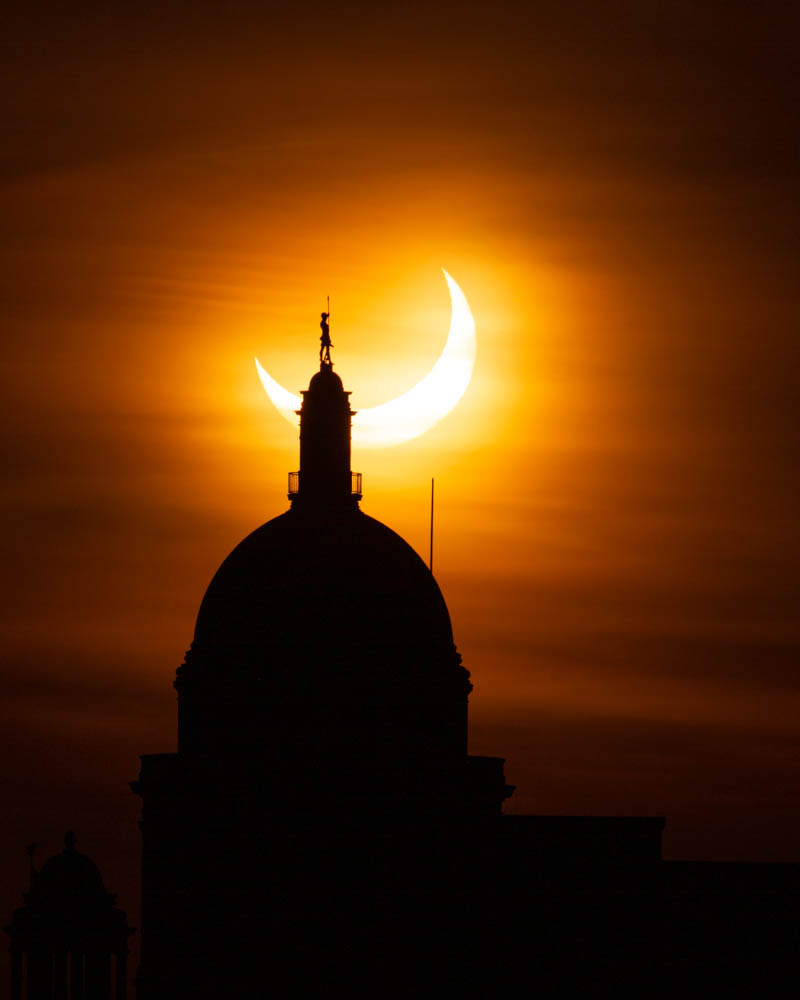 For the shot with the statue in the crescent, the radio tower had crept into the frame in a way that caused it to distractingly break the silhouette of the dome. In this case, for the final print image I decided to edit this major distration out. 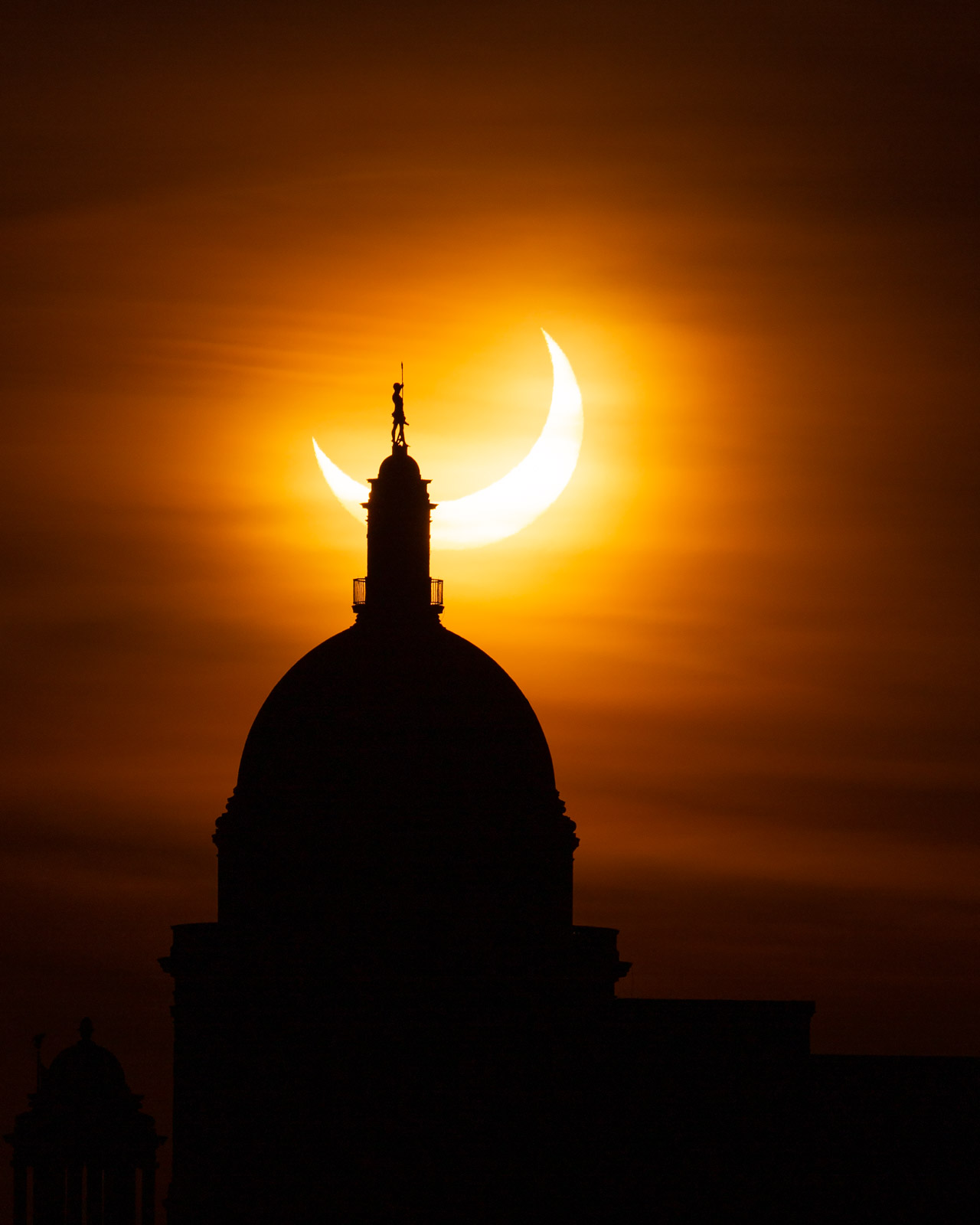 In addition to the view of the dome, I’m also planning a limited release of a tight crop of the statue in 8x10. 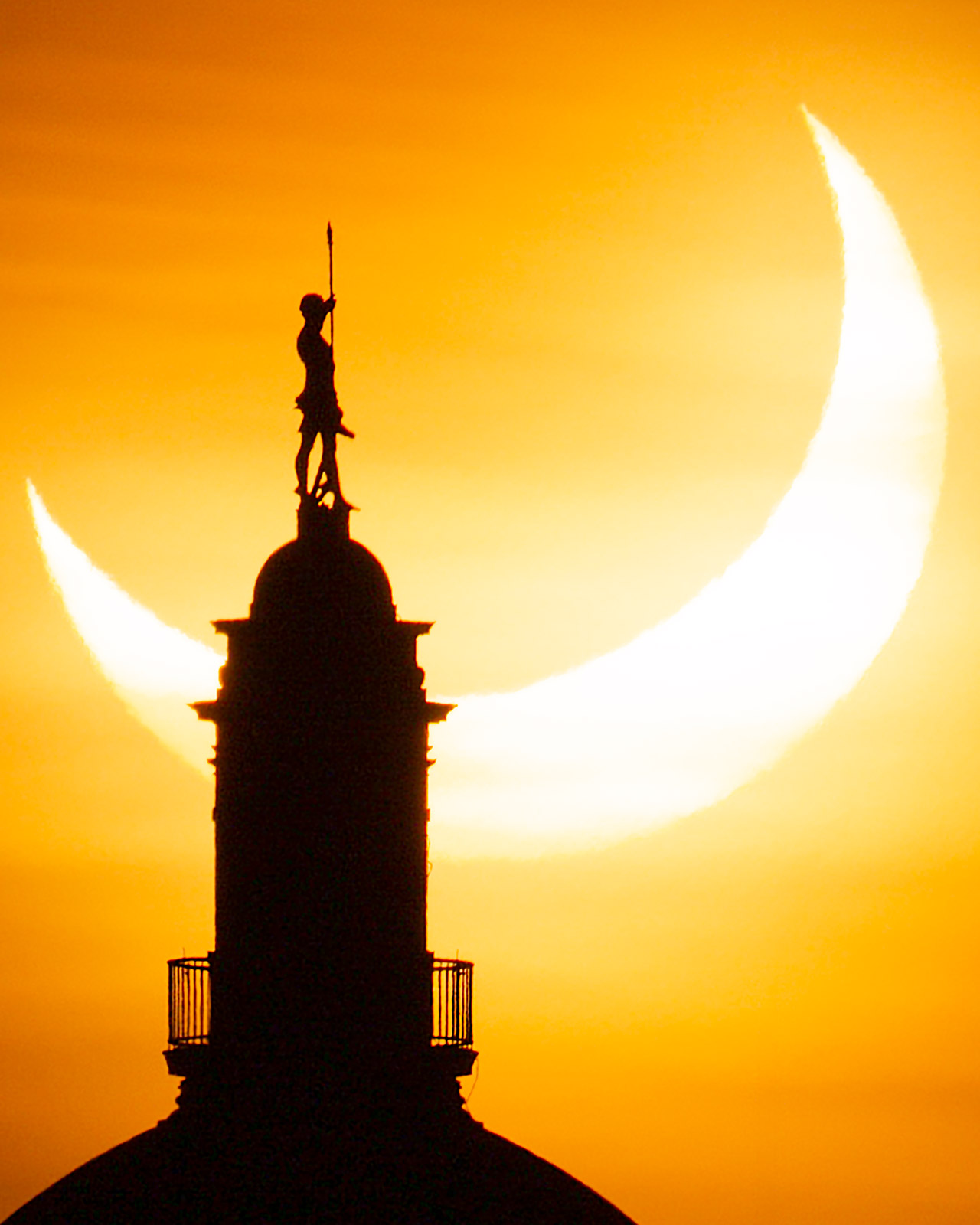 Finally, while it became overexposed due to the fact that I could only manage one camera at a time and the stills had my focus, I did set up a cinema camera to capture video of the sun progressing across the sky behind the dome. Here’s the timelapsed video I shot using that camera.

If you’d like one of these prints on your wall, drop me a line. 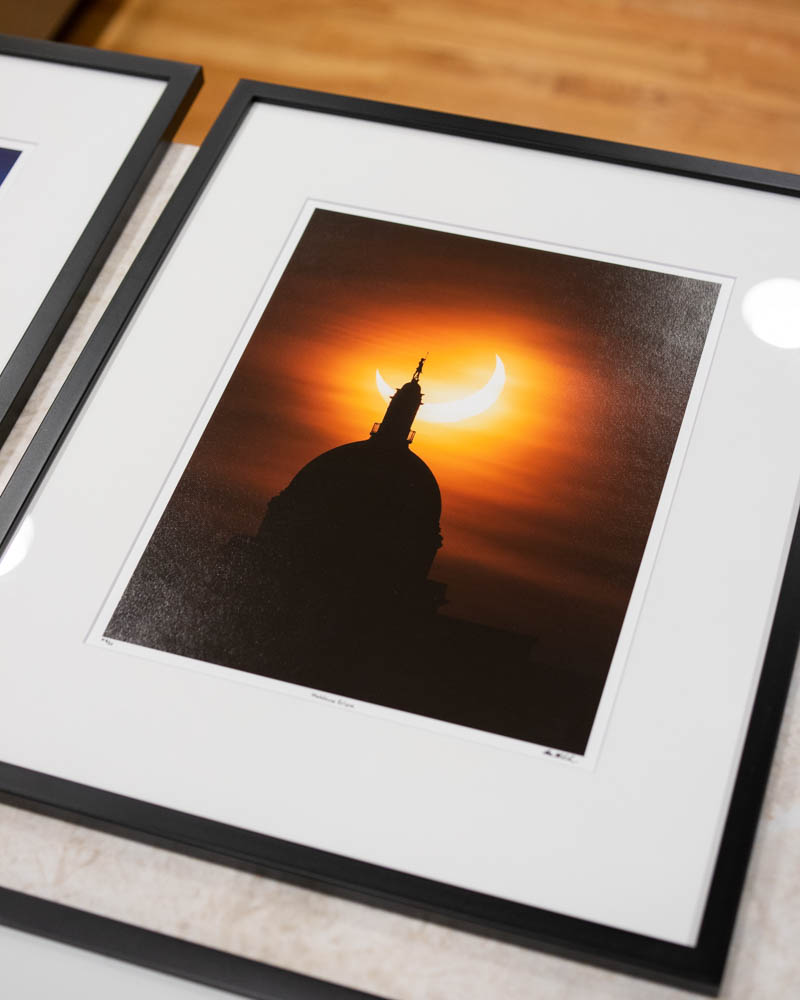