This winter one of my best photography outings came during a visit to Roger Williams Park in the middle of a snow storm. This has been one of my favorite near-to-home locations to shoot, and I looked forward to revisiting a number of subjects and compositions that I’ve shot other times of year.

The conditions of a snow storm are unique in a few regards. One is the fact that there are moving snowflakes in your photos. This lends an opportunity to create different sorts of looks to images by varying shutter speed. Fast shutter speeds will freeze the snow flakes, while longer shutter speeds will cause them to turn to streaks, or disappear altogether into a haze. Beyond this, the time during and immediately after a snow storm is the most likely time to have snow sticking to tree limbs - a phenomena which is both beautiful and fleeting.

One image I liked from autumn time in Roger Williams is a panorama I took of the Dalrymple Boat House, and this was an image I was interested in capturing in these snowy conditions.

I got out the car and immediately headed across the iron footbridge to the vantage point for this image. I set up the tripod (which takes a little work for a multi-shot panorama to ensure that the panning axis is level with the ground, made easier by my leveling base). At this point, the snow was really coming down hard, to the point that it was difficult to clearly see the boat house, so as is often required in landscape photography, I sat and waited with my camera ready to capture the shot when the conditions where right (glancing at my weather app so I would have an idea of how long it might be before the current snow band would move on). Once the snow finally let up a bit, I shot a few different panoramas with different shutter speeds to render the snow differently. The one at the beginning of this post was shot at 1/15 of a second to render the snow as streaks that have a sense of motion, while the one below was shot at 1/200 of a second, which essentially freezes the snow in place.

After shooting the panorama, I made my way over to a vantage point of the Miantunomu Bridge. This was another location of a shot I really liked from the autumn. It’s not quite as striking in the winter, but with the snow on the branches and the frozen lake, it’s a lovely scene in its own right. 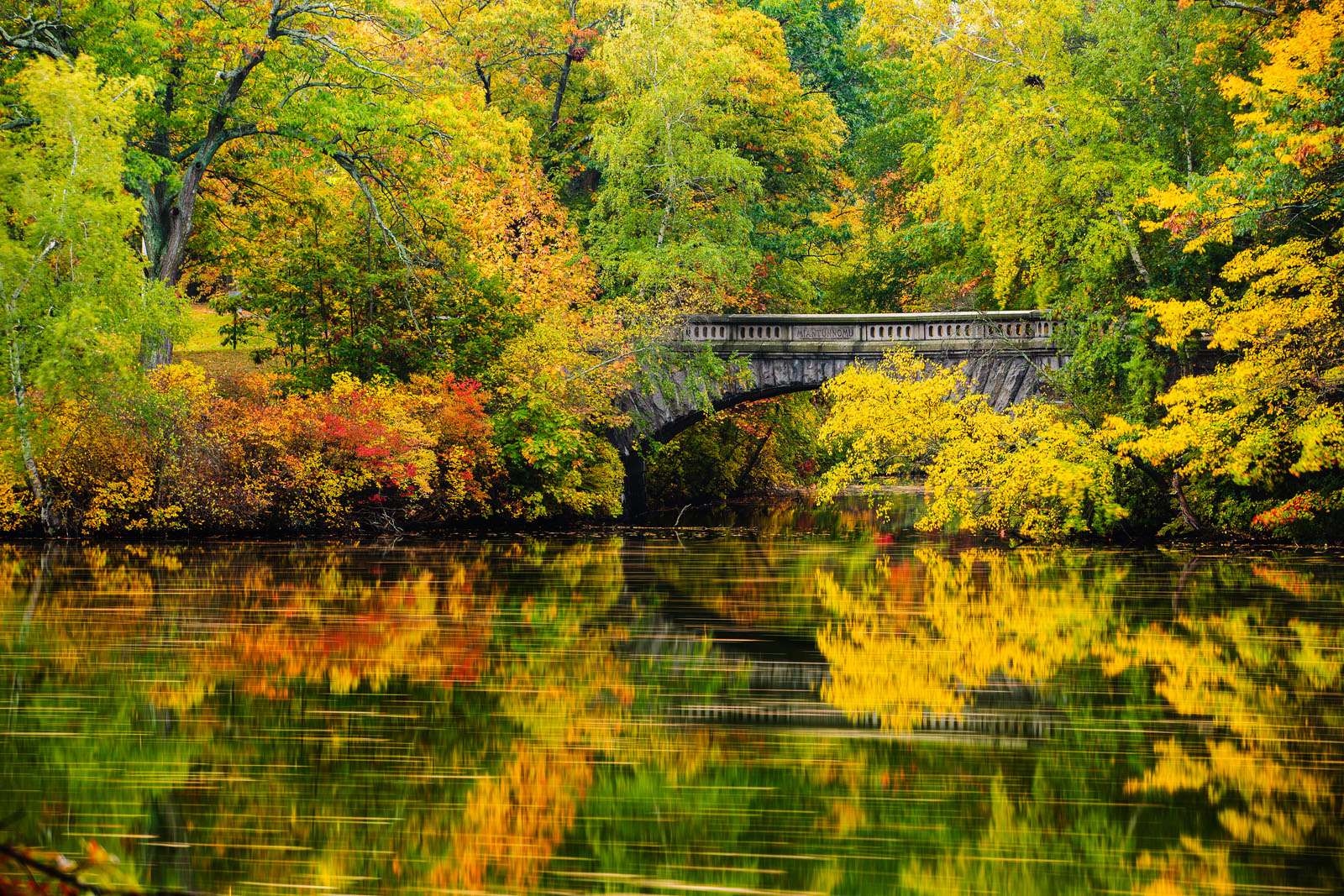 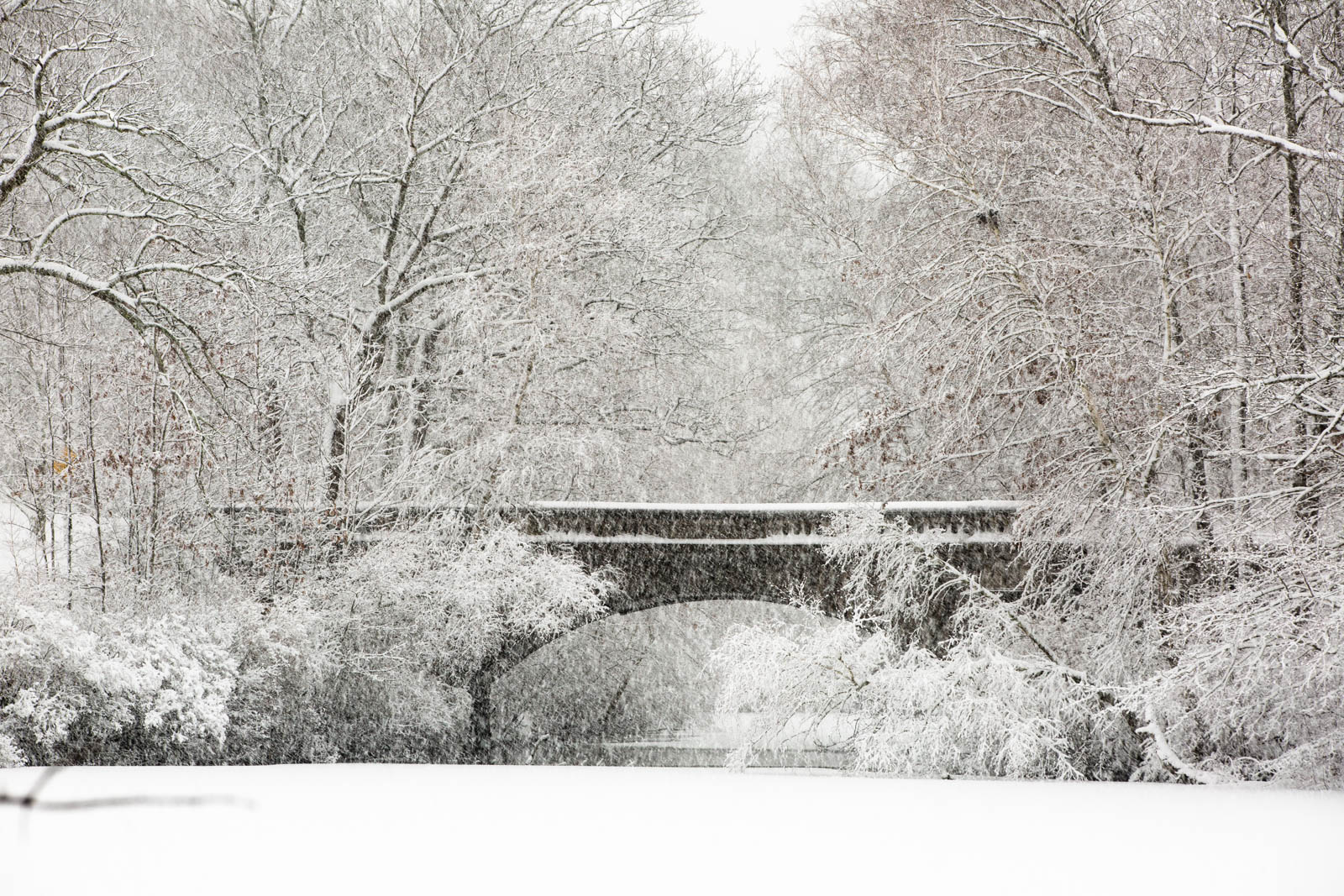 After shooting the Miantunomu bridge, I headed back towards the iron footbridge. On my way there I shot a series of detailed shots of the boathouse, again varying shutter speed to obtain different looks in the snow. 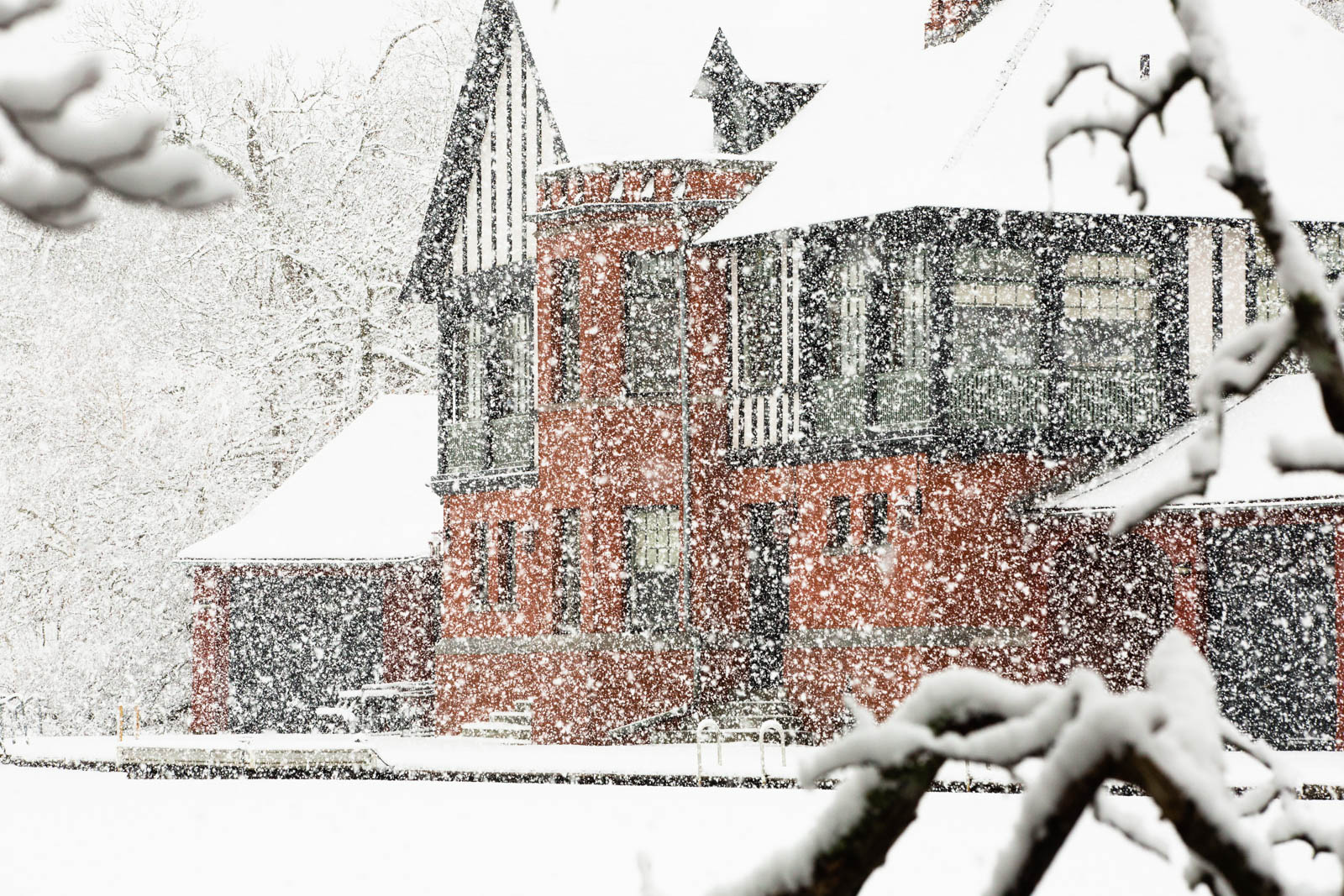 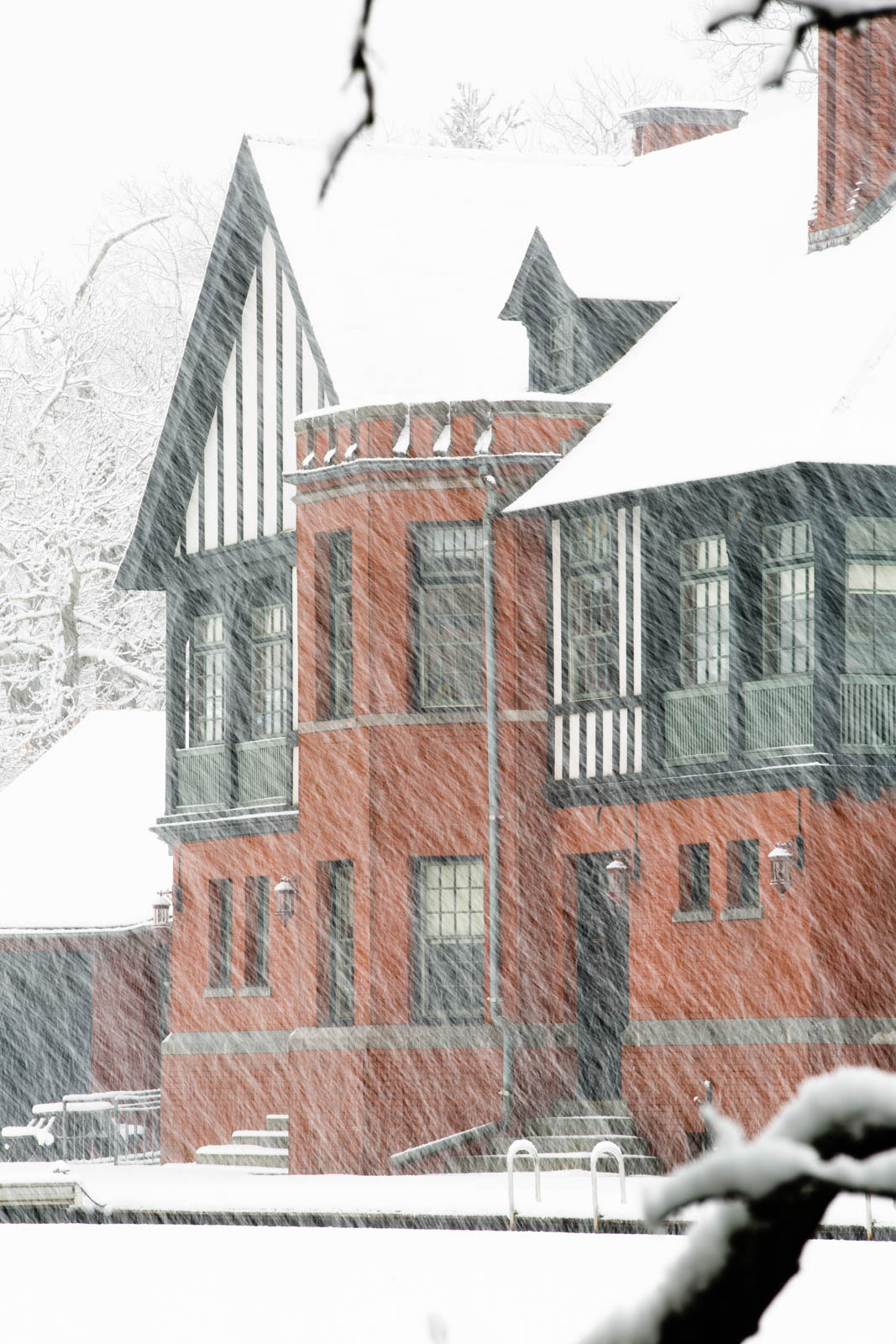 After shooting these images, I turned to the footbridge which had been a subject of one of my favorite photos from the fall. 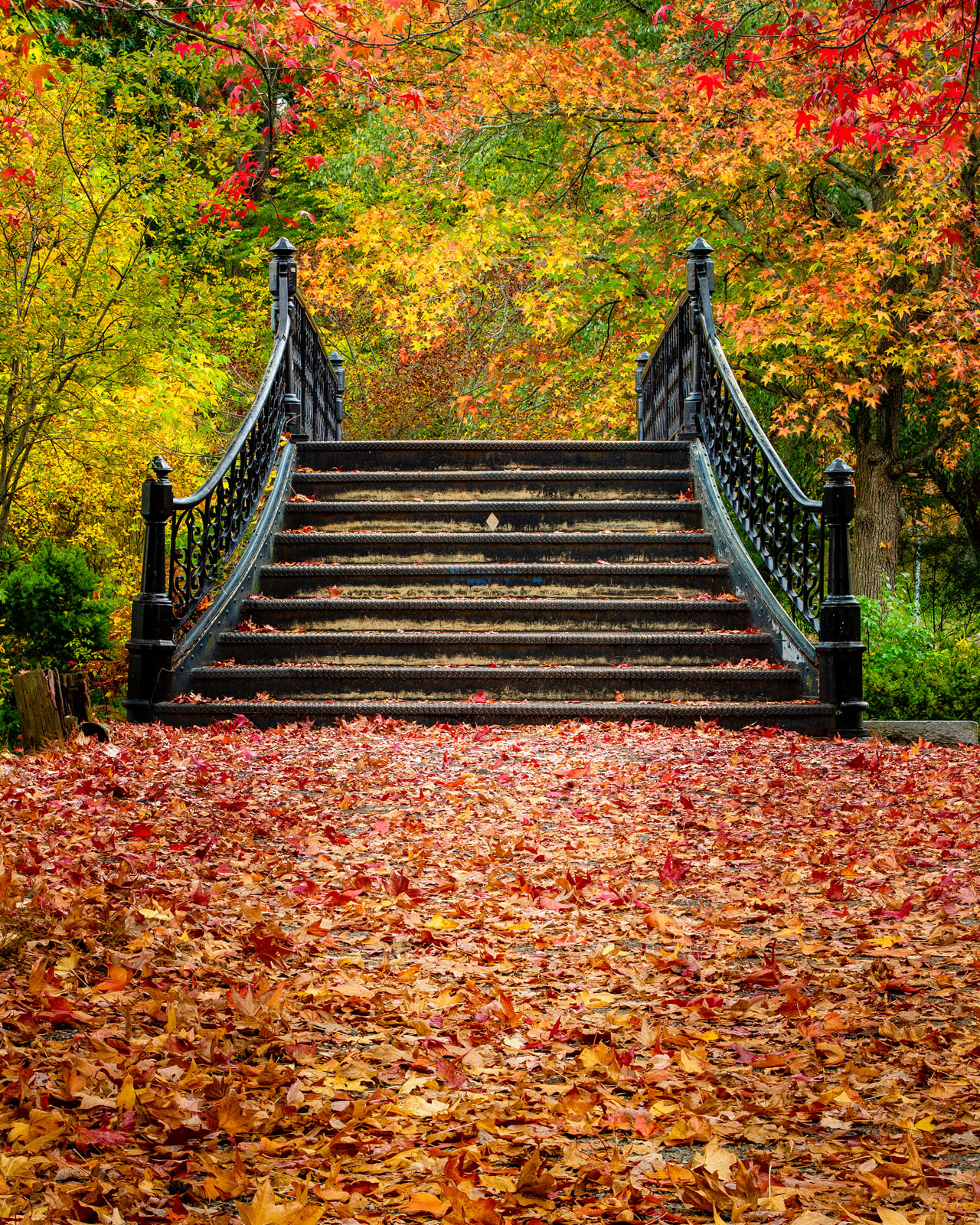 With the heavy snow that was falling, I noticed that the footprints I had made when crossing the bridge had been covered (this is one challenge with pristine snow and sand - photographer footprints), and I lucked out in that no other people had crossed the bridge since then! I decided to shoot the scene in a similar manner to how I had shot it in the autumn, albiet with less foreground (because the simple white carpet of snow offers far less interest than the leafy carpet), taking advantage of the higher framing to include more of the intricite maze of snow-covered branches. I was very thankful for a couple who were happy to wait patiently in the driving snow for me to capture the image with a pristine covering before they crossed over the the other side. Of all the images I shot that afternoon, this is my personal favorite. 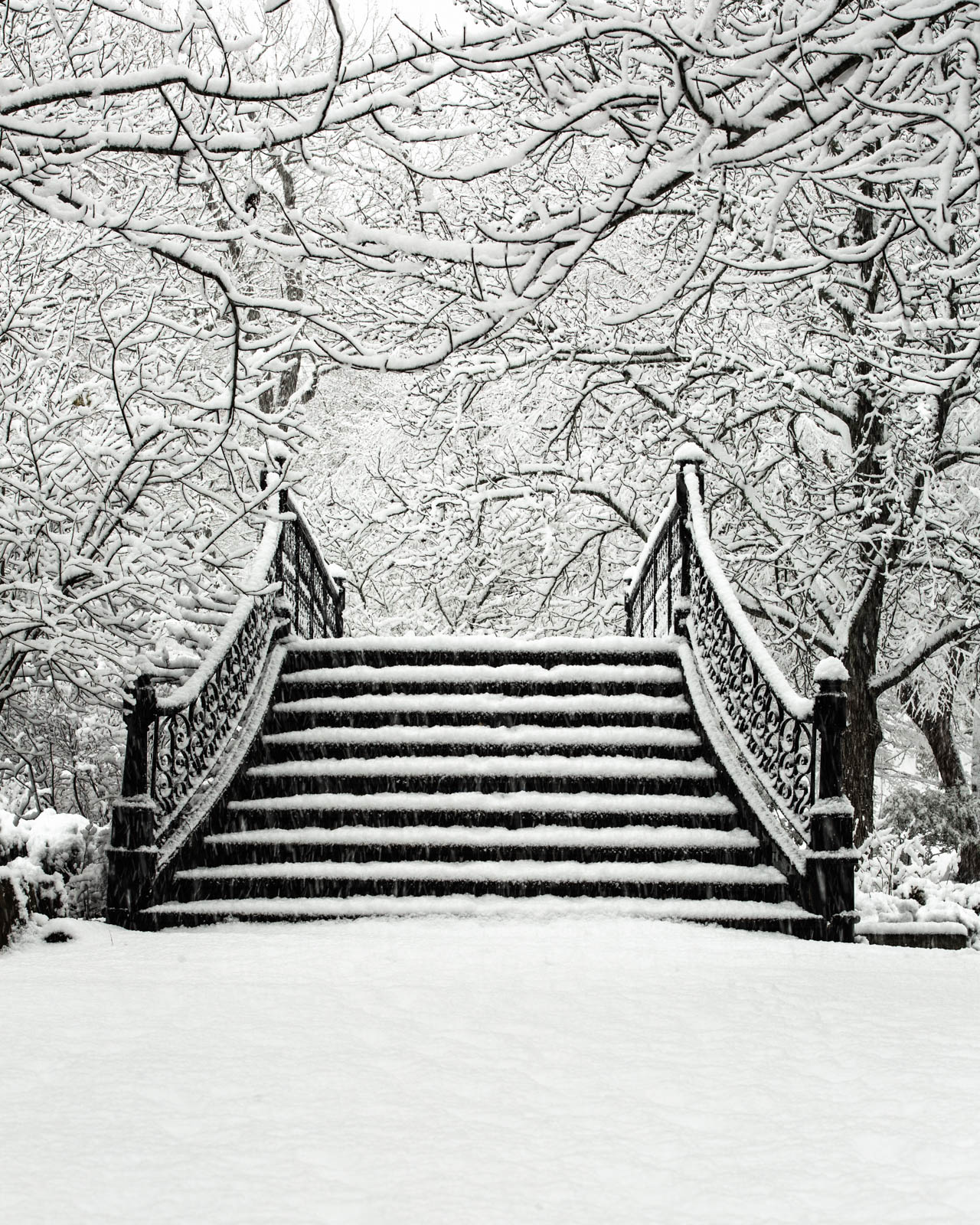 With this image captured, I followed the patient couple across the bridge and headed to the Japanese Garden. Here I once again settled on a panorama. This was not a scene I had focused on much in the fall (it’s more of a spring location - more on that in a future post) to capture the frozen water and the snow stuck on the brances.

With the light fading, I walked around a little bit more and noted a nice framing of the Bandstand in the snow that I shot with my long lens. It was a nice image to finish out a fun afternoon playing in the snow. 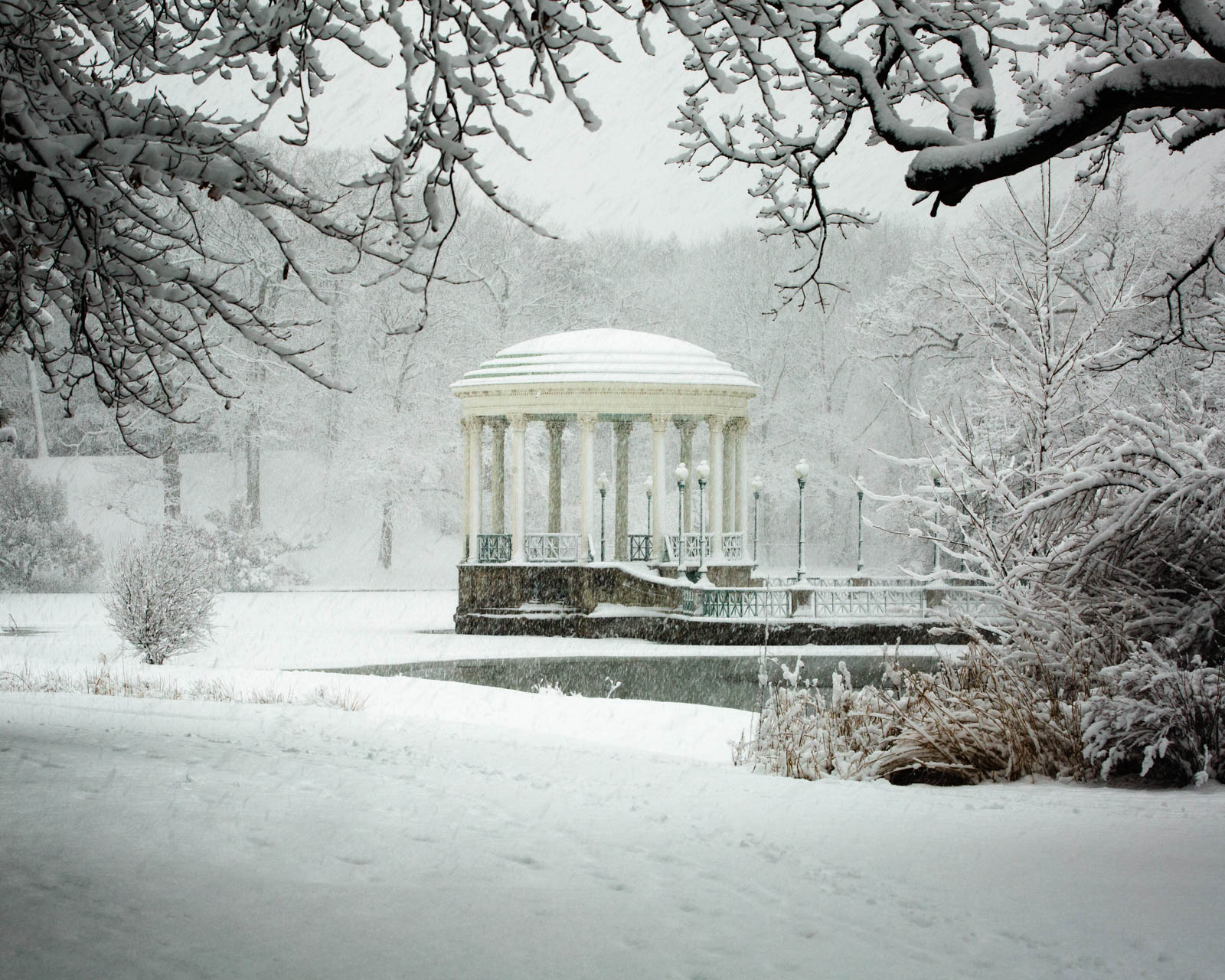