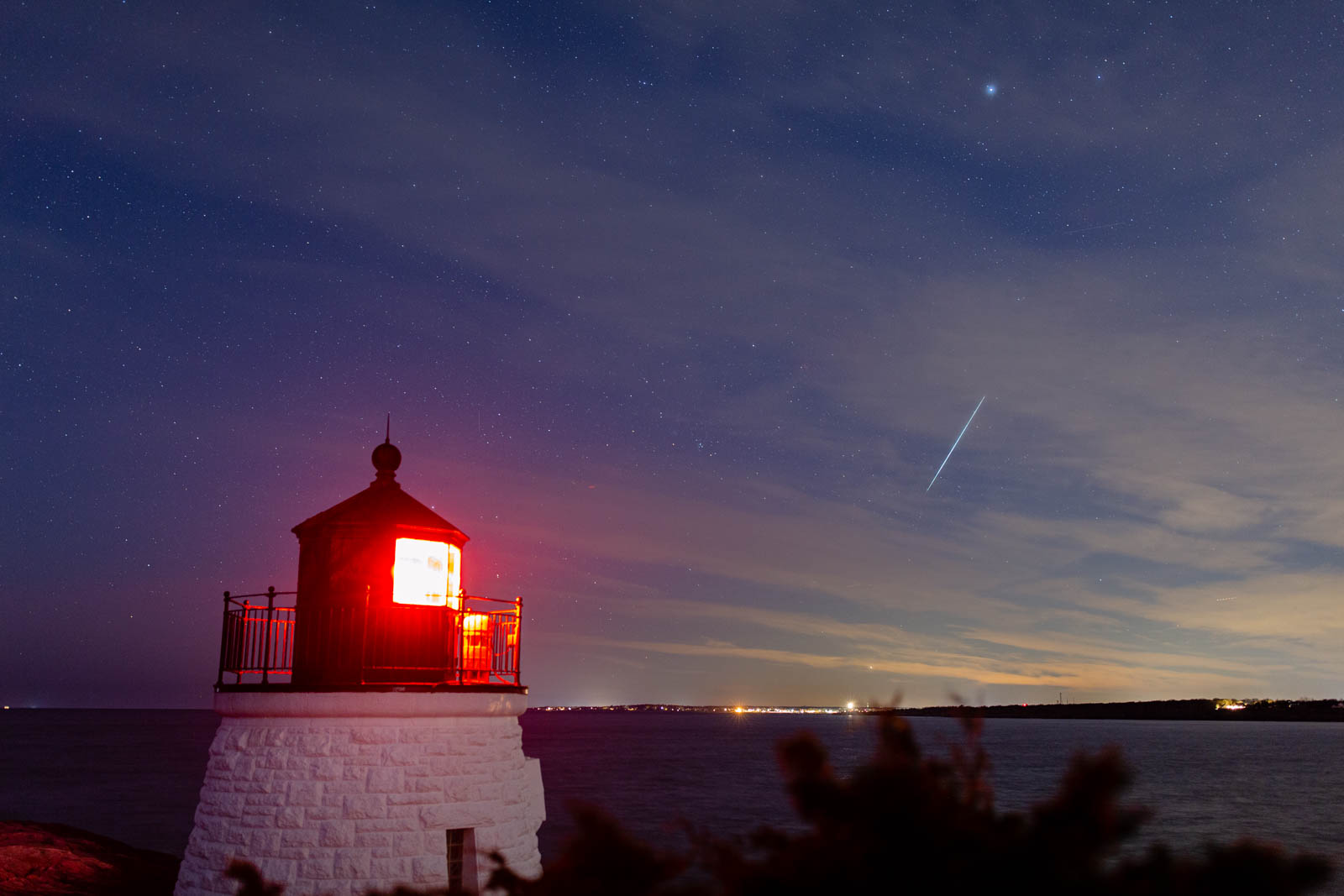 It has been a little while since I posted a blog update. While I still need to do one to cover a family trip to the Southwestern USA back in October, I figured I could make a quick one about photographing the Geminids on Tuesday morning.

Skies were looking good for this year’s Geminid meteor shower, and I have a new camera body I’ve been itching to try out with a wide-angle lens I picked up a few months back. Wide-angle lenses work well for things like meteor showers as they frame more of the sky (increasing your odds of capturing a meteor), but they tend to make things seem far away, so I’d need to be able to get close to whatever foreground subject I was going to include with my sky. I ended up deciding to go to Castle Hill Lighthouse down in Newport. It’s a smaller navigational beacon that’s located right on the rocky coast, and provided you’re able to get in at Castle Hill you can walk right up to it. It also affords the ability to frame a composition looking towards the west-southwest, which was where the constellation Gemini - the radiant of the Geminids meteor shower - would be after 2:30 following the waxing gibbous moon setting (giving darker skies).

I snoozed a bit past my 1:30 AM alarm and arrived later after moonset than I intended, but still got to the lighthouse with a few hours of darkness ahead of me. I went to work framing up compositions with two different cameras on tripods - my new 5DsR with my recently-acquired 12mm prime lens, and a 5Diii with my 35mm prime. Meteors appear and burn up so quickly that it’s not generally feasible to reactively photograph them (i.e., if you wait until when you see a meteor to press the shutter, the meteor will be gone before the camera actually takes the photo). Photographing meteors is a numbers game - you have to just take pictures and hope that one streaks through your scene while the shutter is open. To do this, taking long exposures increases the % of time that your shutter is open, which increases your odds. Using multiple cameras also helps increase the odds of catching a few. I put both cameras on intervalometers to set them taking repeated long exposure images. I wish I had a BTS image to show, but the darkness and need for multiple cameras taking images of the sky meant that setting up another LE shot would have meant cameras and tripods I don’t have.

Some technical info on the exposures I was using for each camera:

As the cameras clicked away, I bundled up (it was in the mid-30s), took a seat in the folding chair I had brought with me, and watched the show unfold overhead. I figure there were 2-3 meteors of varying brightness in the sky every minute or so - in line with the typical 100-150 meteors per hour that are generally expected with the Geminids at their peak. In the end, of the nearly 700 frames I took between the two cameras, quite a few of them included meteors, but only four that had what I’d consider fairly nice ones. Looking closely, I think that the 3rd and 4th are actually the same meteor captured by both cameras. 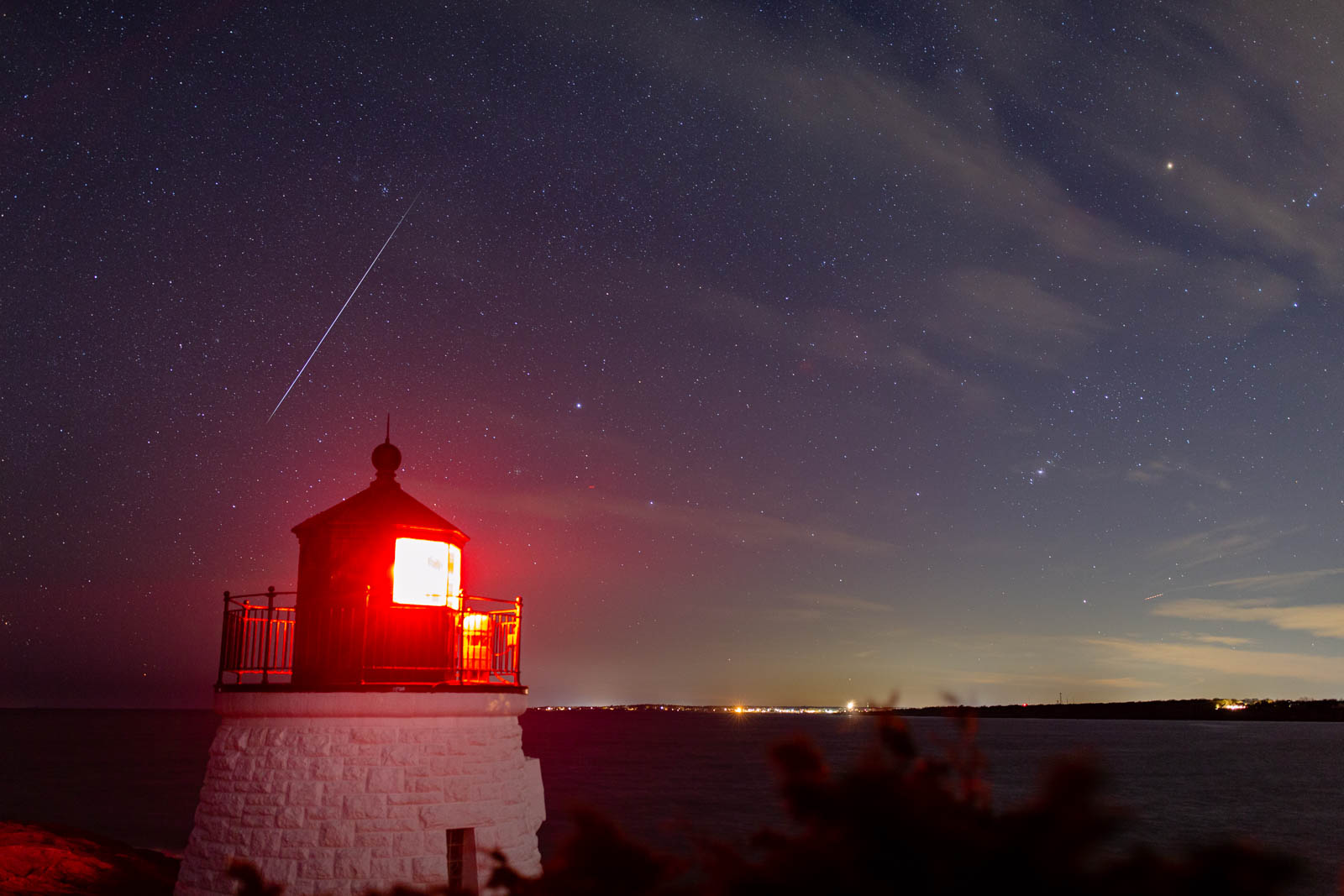 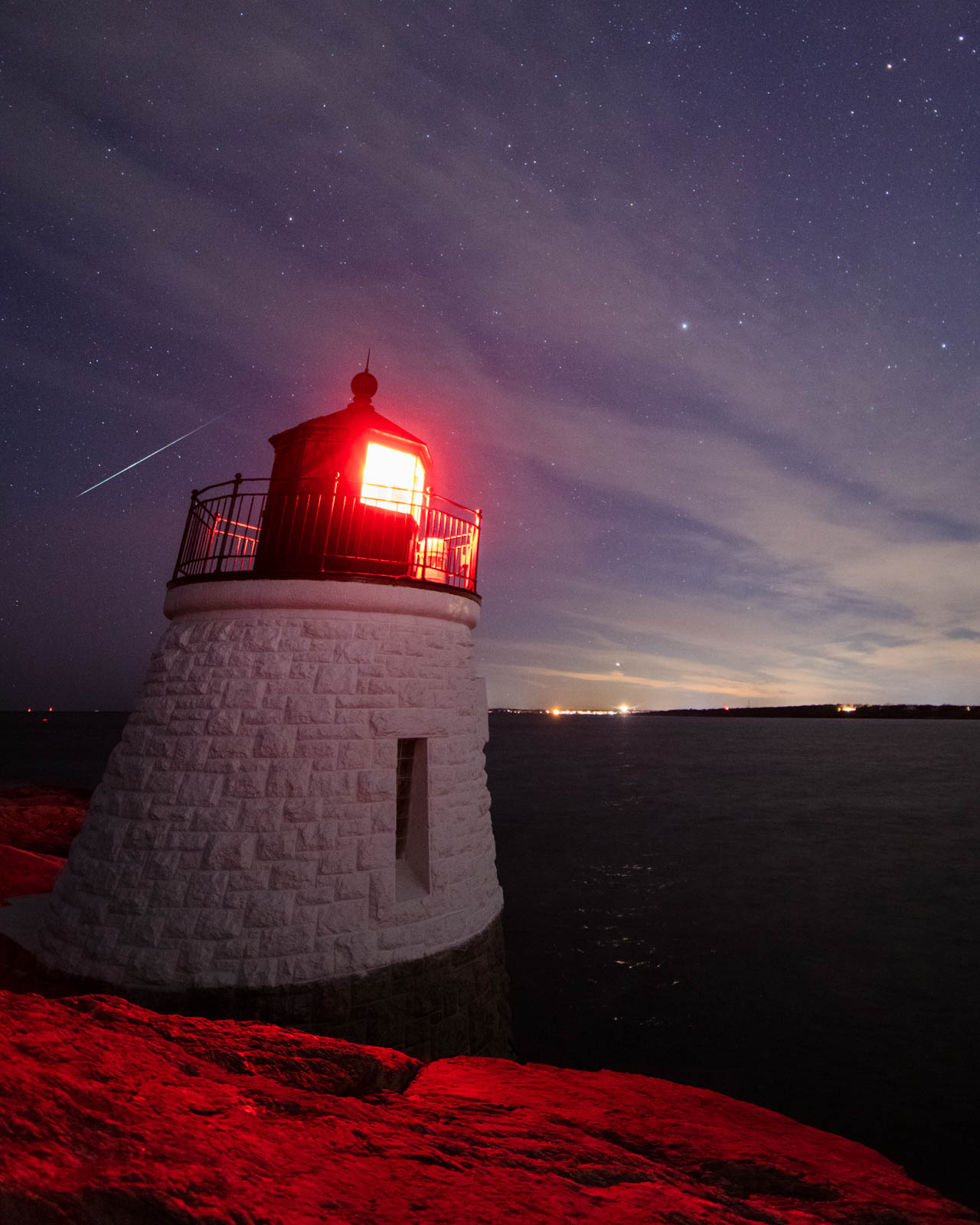 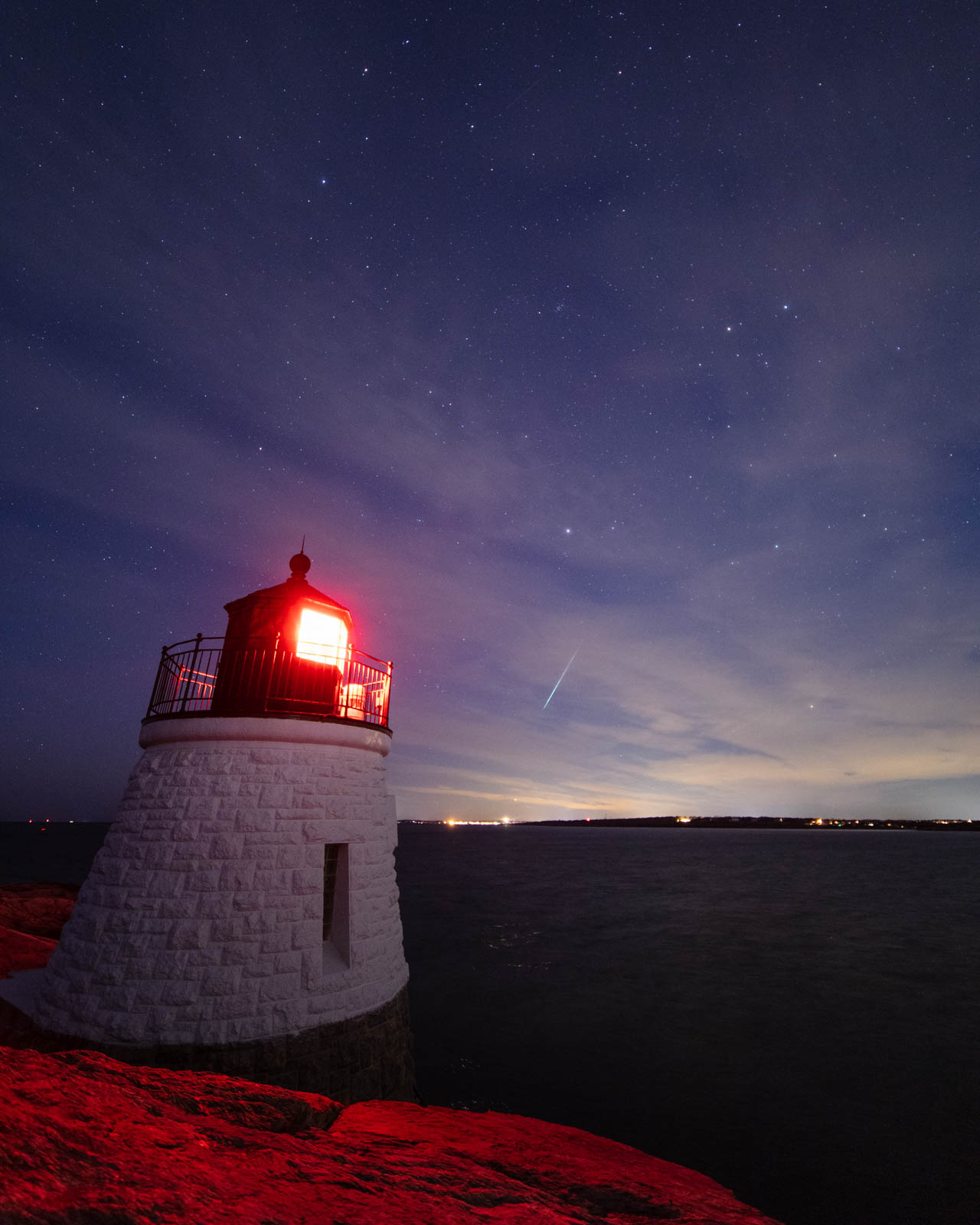 Given that I was using intervalometers to take the images, they ended up being at regular intervals which also meant I could make a nice time-lapse with the one camera I didn’t tweak during the imaging session.

One aside - it was interesting to me how many satellites showed up in my frames. Space is getting very busy, and in the pre-dawn hours, when orbiting satellites are illuminated by the sun but the sky overhead is still dark, they show up in droves. In some cases, it can be tricky to distinguish between a flaring satellite and a meteor. I think all the above shots are meteors, but there is at least one for which I’m not 100% certain. Wide-field astrophotographer Alyn Wallace put together an informative post about how to distinguish between the different objects that cross our skies.

As a bonus, my path home took me by Brenton Point State Park where I had just enough time before needing to take kids to school to catch some high-altitude-clouds (which had been somewhat disruptive to my meteor imaging) burning with underside illumination just before the sun came over the horizon. It was a nice way to end a fun landscape photogrpahy outing. 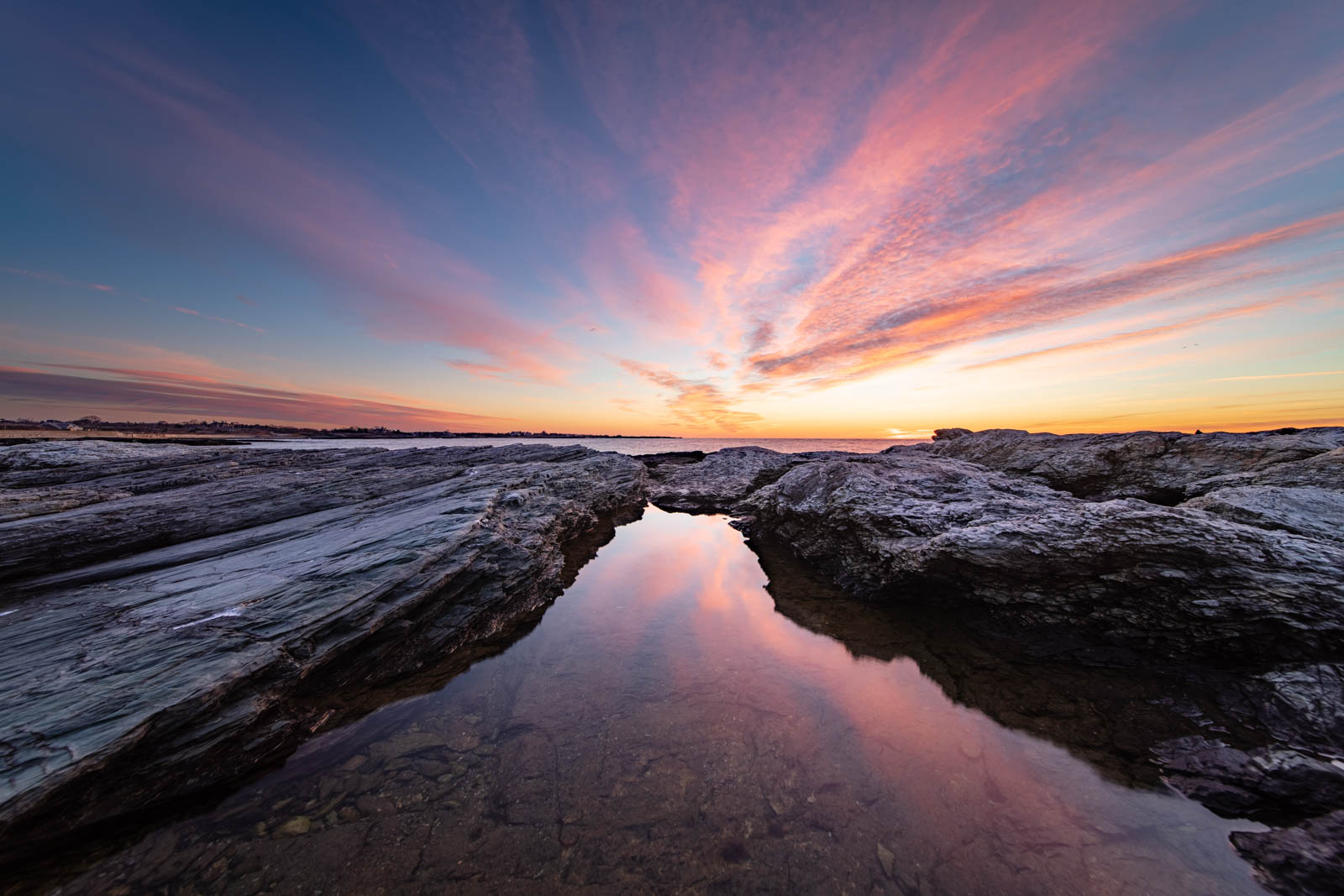